The countries and international organizations has started discussions and so are governments. This discussion has now coming to the point it will start damaging India’s Economy and will have serious implications.

US Congress has already issued statement and so is USCIRF and Congress Members, and Bernie Sanders has raised serious questions on India’s handling of Racism, Hate and Violence against its minorities.

EU Parliament will take up the issue once opened. It has 3 resolutions on the matter.

OIC – Organization of Islamic Cooperation is world’s second biggest group of countries has already issued statements and requested government of India, to protect the life and properties of Muslims.

GCC – Gulf Cooperative Council is world’s smallest but richest group with substantial exposure and relations with India and with very good say across the worlds, is started serious talking about Islamophobia and Hate in India. This will have serious economic impact.

US, Europe and UK, number of Muslim countries has echoed their concern for the Hate Crime and Islamophobia in India. 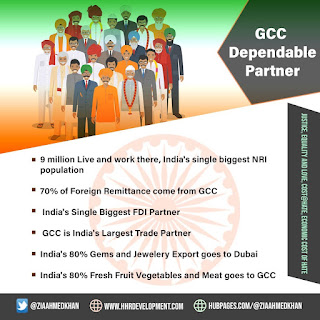 Notably among them are Turkey, Iran, Malaysia, Indonesia has come out with their statements.

The real question is How is the cost or economic impact of all this hate mongering.

I will start with GCC.

1.      GCC hosts 9 million Indian – This number can vary between 9 million and 12 million depending upon how you view or calculate.

3.      More than 80% Indian working in GCC are low wage earners or labor which are easy to replace.

GCC countries account for 15 percent of India’s total import and 12 percent of the country’s total export basket in value terms.

Among the GCC countries, UAE accounted for the major chunk of India’s exports and imports with $30.08 billion and $29.77 billion respectively in FY19. 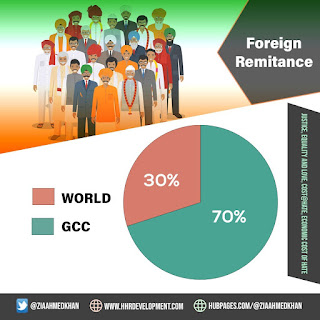 UAE is the major destination for India’s jewelry exports, accounting for about 80 percent of India’s exports.

Indian National make up the Gulf states’ largest expatriate community, with an estimated 9.6 million Indian nationals living and working in the region; especially in Saudi Arabia (2.8 million) and the UAE (2.6 million.

The GCC is India’s largest regional-bloc trading partner, which accounted for $104 billion of trade in 2017–18, nearly a 7 per cent increase from $97 billion the previous year. This is higher than both India–ASEAN trade ($81 billion) and India–EU trade ($102 billion) in 2017-18. Two of India’s top five trading partners, the UAE and Saudi Arabia, are from the Gulf. The GCC also provided over $55 billion in foreign-exchange remittances from Indian expatriates in 2017, accounting for over 70 per cent of India’s total.

They aim to increase bilateral trade by 60 per cent over the next five years and have set a target of $75 billion for UAE investments into India’s infrastructure development, spanning ports, airports, highways and construction, as well as petrochemical projects. 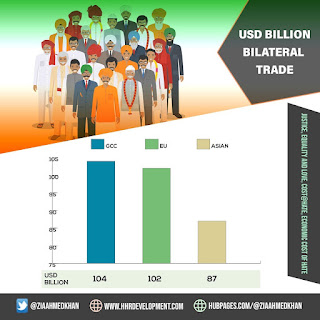 India expected to attract large-scale investment from the GCC to India, following the recent announcement of the development of a $44 billion oil refinery to be built by Abu Dhabi National Oil Company (ADNOC), Saudi Aramco and Indian counterparts.
The announcement comes a few months after Emirates Group announced a $4.23 billion (INR300 billion) aircraft maintenance, repair and overhaul (MRO) project in Andhra Pradesh in February this year.
Aramco is also in talks with Reliance Industries Limited  to purchase a 20 per cent stake in its oil to chemical business, which is estimated at US$75 billion ($125.5 billion). 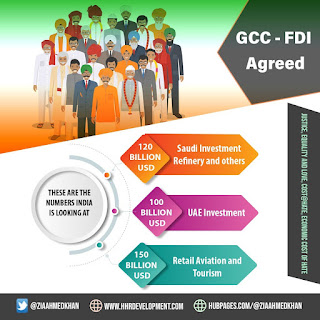 The GCC has also invested in developing India’s energy infrastructure. In 2019, the Saudi Ambassador to India stated that Riyadh wished to invest US$100 billion ($166 billion) in India

Foreign Direct Investment (FDI) in India increased to $61.96 billion in 2017-18, according to Indian Government’s Department of Industrial Policy and Promotion (DIPP). Total FDI reached $ 61.96 billion in the last four years, it said.

Yusuffali predicts that an investment to the tune of $150 billion will flow into retail, aviation, tourism and manufacturing sectors from Gulf countries.

This will have a mutual benefit for both the countries as India faces 30 per cent wastage in the Indian farm sector due to bottlenecks in storage, packaging and transportation, and investment by Saudi Arabia would benefit both the countries. 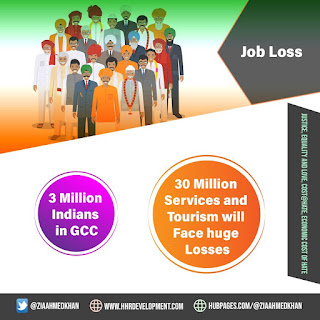 And with an average GDP per capita of US $ 61,559 in terms of purchasing parity, most GCC nation rank in worlds top ten richest countries.

Indonesia and Malaysia account for 85% of the world's palm oil output while India is the biggest buyer of edible oil.

Indonesian crude palm oil has sold at a premium to Malaysian oil since India this month placed curbs on imports of refined palm oil.
The trade ministers of India and Indonesia, which want to more than double their bilateral trade to $50 billion by 2025, met in Davos on Thursday and agreed to fast-forward trade between them, one of the informed sources
An Indian government document, reviewed by Reuters, said that Indonesia had "informally agreed" to double the annual quota for Indian bovine meat exports to 200,000 tonnes.
Indian-Indonesian trade was worth $21.2 billion in the  2019.

The Foreign Tourist Arrivals in India is small compared to global standards. The lack of enough and quality infrastructure is one reason, the culture and social environment is second factor.

The arrivals are divided as Foreign and NRI, we will discuss only Foreign Arrivals.

The single largest arrival is Bangladesh Nationals. Then come US and Europe. The Bangladesh alone constitute more than 20% of total arrivals, USA and Europe together constitute another 25%.  The remaining 55% is scattered over countries. North Africa, GCC and Malaysia together is above 10%. Other Muslim Countries has another 3% arrivals in India.

Tourism is one of very important employment sector for India. The present environment of hate will directly affect sentiments of Tourist and their arrivals. Not only the Muslims but all arrivals will be affected.

We see more than 50% reduction in Tourist arrivals from Muslim World to India. The NRI arrival will also be heavily affected because of Job loss.

The arrivals from USA and Europe will be affected by 15%, as sentiments go negative. This will affect India’s direct foreign currency income and employment. 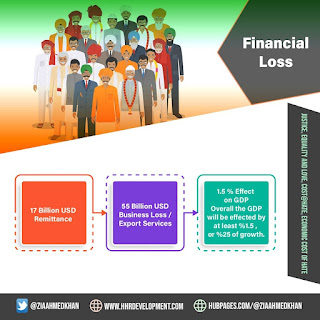 Services Sector – India’s services sector is more dependent on USA and Europe. IT, ITES are mostly catered to developed world. In last few years, there is substantial growth and Opportunities are generated from GCC. This growth is steady and remain double the average growth of India’s services sector exports. This nascent sector will face challenge to survive in GCC, North Africa and Malaysia, Indonesia.

The Effect of Hate on FDI and PPP and other projects

As Result of Increase of Hate in India, India will see substantial losses in terms of financial loss. Remittance will be down by 30% or 17 Billion Dollar, direct commercial loss or loss of business will be 55 billion and overall Indian economy will be take hit of 1.5 percent.

The sentiment in GCC particularly and worldwide in general will be negatively impacted. The investors look for safety of their amount and social conditioning. Peace is most important to drive growth anywhere in the world. Without peace and harmony, it is impossible to find growth and development. Hate will not only drag down the growth of particular community but it will have drag down effect on everyone. These negative sentiments will persist for the long time. GCC human rights activist and global Human Rights activist particularly in EU and USA will have substantial impact on FDI in India.