Mudarabah: mudarabah or partnership in the profits of capital and labour, is a partnership in which one party is entitled to profit on account of its capital while the other party is entitled to profit on account of its labour. This is considered to be the purest form of Islamic financing, because profits are shared in pre-agreed proportions and losses are shared in proportion to the investment made by each investor. On loss, there is unanimity among Muslim jurists on the principle that a party who has no capital invested does not have to share the loss.  Mudarabah is an important variant of Shirkah (partnership), in which a financier as an investor (rabbulmal) or a group of investors provides capital to an agent or manager (mudarib), who undertakes to do business with the capital provided and the profit is shared according to the pre-agreed proportions. The term “Mudarabah” is interchangeably used with Qirad and Muqaradah. 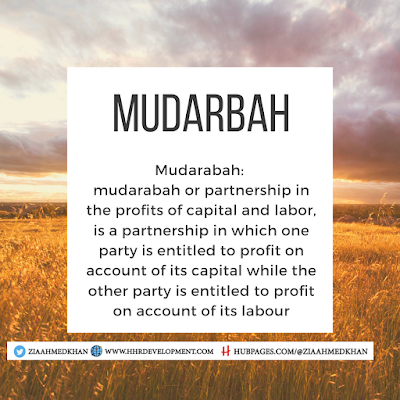 Rules regarding to Profit and Loss

Profit from the business under mudarabah is to be shared in an agreed ratio. In Mudarabah, the payment of profit to the capital-provider/financier cannot be in the form of a fixed amount or any percentage of the capital employed. The risk for the investor is that any loss is always exclusively borne by him. The risk for the mudarib is the loss suffered by way of expended time and effort, for which the mudarib does not get any remuneration on account of the loss in the business venture. Any ambiguity or lack of clarity regarding capital or ratio of profit makes the mudarabah contract invalid. The rabbulmal (the capital-provider) can contribute his/her labour subject to the permission of the mudarib.

Both the parties of a mudarabah are at liberty to agree on the proportion or ratio of profit-sharing between them with mutual consent. They can agree on equal sharing or allocate different proportions. However, a lump sum amount or profit/return on investment for any of the parties cannot be agreed upon. The profit earned is to be divided in the strict proportion agreed at the time of the contract. If loss occurs in some transactions and profit is realised in some others, the profit can be used to offset the loss in the first instance, then the balance, if any, can be distributed between the parties according to the agreed ratio.

The parties in mudarabah can agree with mutual consent that in the event the profit is over a particular ceiling, then one of the parties would take the additional profit. However, if the profit is below, or equal to, the stipulated ceiling, then the distribution will be according to the agreed ratio. The profits realised from the mudarabah business cannot be finally distributed until all the expenses have been paid, in accordance with custom and the original agreement.

Use of Mudarabah by Islamic Banks

Mudarabah is a viable basis for Islamic banking whereby an Islamic bank plays the role of a financial intermediary. The arrangement can be made adopting a two-tier mudarabah agreement. The first tier of the mudarabah agreement is between the bank and the depositors, who agree to put their money in the bank’s investment account and to share the profit with it. In this case, the depositors are the capital providers (rabbulmal) and the bank functions as a manager of the funds. The second tier of the mudarabah agreement is between the bank and the entrepreneur, who seeks financing from the bank; they agree that the profits accruing from the business will be shared between them and the bank in an agreed proportion, but any loss will be borne by the financier only (the bank). In this instance; the bank functions as the provider of the capital and financier while the entrepreneur works as a manager. In cases where there is more than one financier of the same project (one project jointly financed by several banks), profits are to be shared in a mutually agreed proportion previously determined, but any loss is to be shared in the proportion in which the different financiers have invested the capital.

Mudarabah is the basis of Islamic banking in the sense that funds are mobilised by banking and non-banking financial institutions mainly under this arrangement. Islamic banks, other financial institutions, a mutual fund or a company can also mobilize funds for investment by issuing negotiable Mudarabah Certificates, representing ownership in the funds collected and providing for the profit earned from the investment of those funds to be distributed on mudarabah principles. The investment can be related to the financing of specific projects for a fixed duration. As defined by the Islamic Fiqh Academy of the OIC, Mudarabah Certificates are investment instruments, which mobilise the mudarabah capital by floating certificates as evidence of capital ownership, on the basis of shares of equal value, registered in the name of their owners, as joint owners of shares in the venture capital or whatever shape it may take, in proportion to the each one’s share therein. If the funds so mobilised are also invested on the basis of mudarabah, it will be arrangement of a two-tier mudarabah and the investors would get a variable return or bear loss according to the result of the economic activity conducted by the institution.

If any individual or institution serving as mudarib is doing business on the basis of trade and ijarah-(leasing)-based modes, the investors / financiers receive a fixed or quasi-fixed return to be distributed on mudarabah principles. A Mudarabah Sukuk (bond) can also be issued on the mudarabah principle. On the assets side, mudarabah is best suited for project-and trade-financing. Islamic banks can undertake project financing through a mudarabah singly or through syndication with other banks. It can be used for financing import trade on a single transaction or a consignment basis in the case of a firm order and a letter of credit without margin, where the whole investment has to be made by the bank. Its use is also possible for running businesses and for the purpose of securitisation. In a twotier mudarabah arrangement, the bank acts as a mudarib (agent of manager) for the savers / investors and as financier for the entrepreneurs. If the bank employs the client’s deposits without committing any of its own, it acts as mudarib for the client until the conclusion of the business transaction for which the funds were invested. The bank receives an agreed share of the profit for services rendered. Banks provide funds on the basis of mudarabah usually for single transactions or for fixed durations. Similarly, mudarabah can be for the whole business of a company or for any specific project whose expenses and revenues can be segregated from the main business. The accounts of mudarabah projects are periodically audited in order to determine the distributable profit, which is arrived at after taking into account all expenses. The liability of the Islamic bank under mudarabah is limited to the amount of capital provided by the bank and the creditors of a mudarabah have no recourse to other assets of the bank.

In cross-border financings, exchange risk, political risk and the stability of the country concerned have to be taken into consideration before signing a financing contract on the basis of mudarabah. The bank may also closely monitor the performance of the mudarib during implementation of the project in order to ensure that there are no completion delays, cost overrun, material pilferage, etc. If the financing contract permits, the bank may appoint its representative to the Boards of the financed institution.