What is Diminishing Musyarakah/ Musharkah

Diminishing musyarakah or musyarakah mutanaiqisah is another form of musyarakah which was developed recently by the scholars. It is a musyarakah in which the Islamic bank agrees to transfer gradually to the other partner its (the Islamic bank’s) share in the musyarakah, so that the Islamic bank’s share declines and the other partner’s share increases until the latter becomes the sole proprietor of the venture. According to this concept, a financier and his client participate either in the joint ownership of a property or an equipment, or in a joint commercial enterprise. The share of the financier is further divided into a number of units and it is understood that the client will purchase the units of the share of the financier one by one periodically, thus increasing his own share until all the units of the financier are purchased by him so as to make him the sole owner of the property or the commercial enterprise. 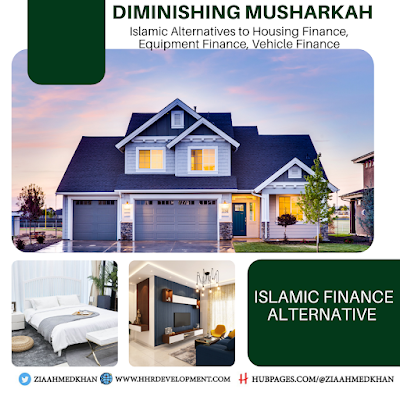 Diminishing musyarakah has taken different forms in different transactions. Some examples are given below:

This process goes on in the same fashion until after the end of two years, the client purchases the whole share of the financier reducing the share of the financier to ‘zero’ and increasing his own share to 100 per cent. This arrangement, among other forms of diminishing partnership, allows the financier to claim rent according to his proportion of ownership in the property and at the same time allows him periodical returns of a part of his principal through purchases of the units of his share. B. ‘A’ wants to purchase a taxi to use it for offering transport services to passengers and to earn income through fares received from them, but he is short of funds. ‘B’ agrees to participate in the purchase of the taxi. Therefore, both of them purchase a taxi jointly; 80 per cent of the price is paid by ‘B’ and 20 per cent is paid by ‘A’. After the taxi is purchased, it is employed to provide transport the passengers whereby the net income of 1000 ringgit is earned on a daily basis. Since ‘B’ has 80 per cent share in the taxi it is agreed that 80 per cent of the fare will be given to him and the remaining 20 per cent will be retained by ‘A’ who has a 20 per cent share in the taxi. It means that 800 ringgit is earned by ‘B’ and 200 ringgit by ‘A’ on a daily basis. At the same time the share of ‘B’ is further divided into eight units. After three months ‘A’ purchases one unit from the share of ‘B’. Consequently the share of ‘B’ is reduced to 70 per cent and the share of ‘A’ is increased to 30 per cent, i.e. from that date ‘A’ will be entitled to 300 ringgit from the daily income of the taxi and ‘B’ will earn 700 ringgit. This process will go on until after the expiry of two years, whereby the whole taxi will be owned by ‘A’ and ‘B’ will take back his original investment along with income distributed to him as aforesaid.

Many see this as little different from a conventional mortgage, because, under both methods, monthly payments are made which may be similar in amount. However, unlike a conventional mortgage, where money is lent to help with the purchase of a property, the Bank makes its profit through the property's physical use via buyer occupation as a tenant. This is one of the fundamentals of Islamic finance whereby you can charge for the use of something physical, like a property, but you cannot charge for the use of money, because this is interest. The relationship between buyer and the Bank is also quite different.