What is Salam Financing

Salam (Advance Payment against Deferred Delivery of Goods) Salam (also referred to as Bai Salam, Al-Salam, Bai al-Salam) is an ancient form of forward contract wherein the price is paid in advance at the time of making a contract of sale for goods to be delivered at a future date. 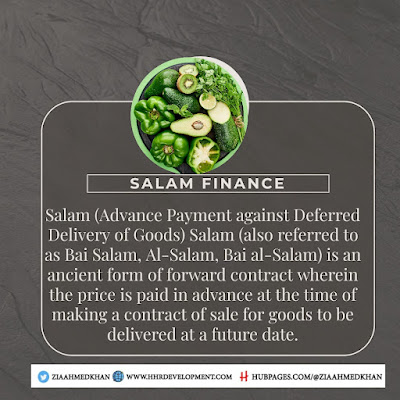 What is given in exchange for the advance payment of the price should not in itself be in the nature of money. For the payment in advance, the contracting parties stipulate a future date for the supply of goods of specified quantity and quality Salam may be considered as a kind of debt, because the object of the salam contract is the liability of the seller, up to the agreed future date, to deliver the object for which advanced payment of the price has already been made.

There is consensus among Muslim jurists on the permissibility of salam, because the object of the contract is that the goods are a recompense for the price paid in advance, just as the price is recompense paid for getting the goods in advance. Salam is permitted, notwithstanding the general principle of the Shari´ah that does not permit the sale of a commodity which is not in the possession of the seller. When Prophet Muhammad (pbuh) came to Madinah (the second holiest city in Islam, after Makkah), the people used to pay in advance the price of fruits (or dates) to be delivered within one, two or three years. But such a sale was carried out without specifying the measure, weight and the time of delivery. Prophet Muhammad (pbuh) said: "He who sells on Salam (money in advance) must sell a specific volume and a specific weight to a specific due date (to be delivered later)". The practice of salam, as ordained by the Prophet Muhammad (pbuh), continued during his life time and also in later periods. The list of items covered by salam suggests that it benefited the owners of farms and orchards. Barring a few exceptions, the Muslim jurists have now expanded the list of items which can be sold under salam to cover all homogeneous commodities that can be precisely determined in terms of quality and quantity. 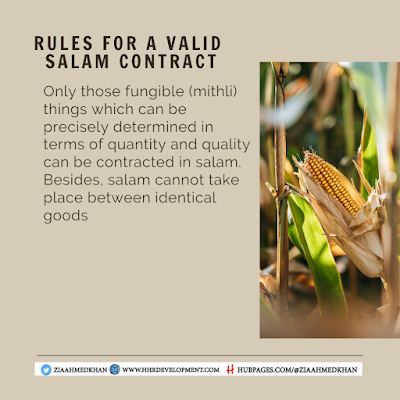 Rules for a Valid Salam Contract

Only those fungible (mithli) things which can be precisely determined in terms of quantity and quality can be contracted in salam. Besides, salam cannot take place between identical goods, e.g., wheat for wheat, Dollar for Dollar and potato for potato. All goods that can be categorized as belonging to the same species can be the subject of salam.

For example, wheat, rice, barley or other grains of this type, motor cars of any trade mark, oil, iron and copper can all be sold through salam. Similarly, electricity measured in kilowatts can be considered a fungible commodity.  In salam, it is necessary to fix precisely the time of delivery of the goods. The buyer must unambiguously specify the quality and the quantity of the goods and the specifications must be applicable to the generally available items of the goods of the contract. The specification of goods should particularly cover all those characteristics which could cause variation in price. Thus the general terms and conditions of salam should be binding in nature and Q2P2T be followed. The first Q stands for the quantity of the commodity to be supplied. The second Q stands for the quality or variety of the commodity. The first P stands for the price to be paid in advance by the buyer and the second P stands for place of delivery. Finally, T stands for the time of delivery.

Islamic banks may face the following risks in salam-based financing:

a) Counter-party Risk (the client may default after taking the payment in advance.)

b) Commodity Price Risk (at the time the goods are received the price may be lower than the price that was originally expected).

d) Asset-Holding Risk / possibility of extra expenses on storage and takaful (the bank might not be able to market the goods in time, resulting in possible asset loss for the unsold goods and locking funds in the goods until they are sold)

e) Asset-Replacement Risk (in case the bank has to purchase goods from the market in parallel salam where the third party fails to supply the specified goods under the parallel contract.

f) Fiduciary Risk in the case of parallel salam (original salam seller might not deliver).

Islamic banks need to take proper measures for mitigation of the above risks. They should purchase only those goods which have good marketing potential; take proper security and a performance bond; insert a penalty clause in the contract as a deterrent against late delivery; obtain a binding promise from the prospective buyers along with a sufficient amount of earnest money in deposit; and fulfil the responsibility of parallel salam-purchase similar goods from the market on spot to supply these to the buyer and recover the loss, if any, from the seller in the original salam. 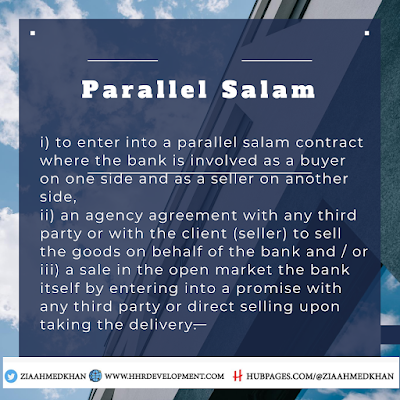 For the disposal of goods purchased under salam, Islamic banks have a number of options, including:

i) to enter into a parallel salam contract where the bank is involved as a buyer on one side and as a seller on another side,

iii) a sale in the open market the bank itself by entering into a promise with any third party or direct selling upon taking the delivery.

Where the bank (as buyer) enters into a parallel salam contract there cannot be any condition or linkage to the first salam contract. (Parallel Salam is allowed with a third party only. The seller in the first contract cannot be made purchaser in the parallel contract of salam, because it will be a buy-back contract, which is not permissible in the Shari’ah). Each one of the two contracts entered into by a bank should be independent of the other, but the bank (as seller) can sell the goods on parallel salam on similar conditions and specifications as previously purchased on the first salam contract without making one contract dependent on the other. This arrangement cannot be tied up in such a manner that the rights and obligations of one contract are dependant on the rights and obligations of the parallel contract. The period of parallel contract in the second transaction is usually shorter and the price may be a higher than the price of the first salam transaction. The difference between the two prices is the bank’s profit

The parallel contract arrangement may not be an attractive mode of disposal of goods for banks, as the amount invested by the bank (the advance payment of the price in the first salam) would be disinvested when the buyer in the parallel contract made the advance payment to the bank for the purchase of the goods under the parallel contract. Under an agency agreement, the Islamic bank may appoint the seller its agent to sell the salam goods on its behalf at a given price which would include the bank’s profit. Some Islamic banks are, therefore, using salam for purchasing goods and appointing the sellers as their agent for subsequently marketing the goods at a price with a suitable profit margin for the bank. In the case of an agency, the salam contract and the agency agreement should be separate and independent of each other. The purchased goods cannot be sold back to the salam seller, hence a parallel salam cannot be entered into with the original seller in the salam contract as it would be considered as being a ‘buy-back’, which is prohibited under the Shari’ah rules.

In the third option, the Islamic bank (as buyer under salam) may obtain a binding promise from a third party to purchase the goods from the bank. This promise should be unilateral from the prospective buyer. The bank (as buyer) will not have to pay the price in advance, as the prospective buyer is merely making a promise and it is not an actual sale. However, the bank can ask for earnest money (a security deposit as an act of good faith). As soon as the bank purchases the goods, they will be sold to the third party at the pre-agreed price, according to the terms of the promise. Banks may also wait until receipt of the goods and sell them in the open market, but they will be taking the asset-risk for the period the goods remain in the bank’s inventory. It is important to note again that the salam goods cannot be sold back to the original seller owing to the prohibition of the ‘buy-back’ arrangement.